That's how it all started:
Fliegerwerkstatt 2015

We cordially invite you and look forward to seeing you again! 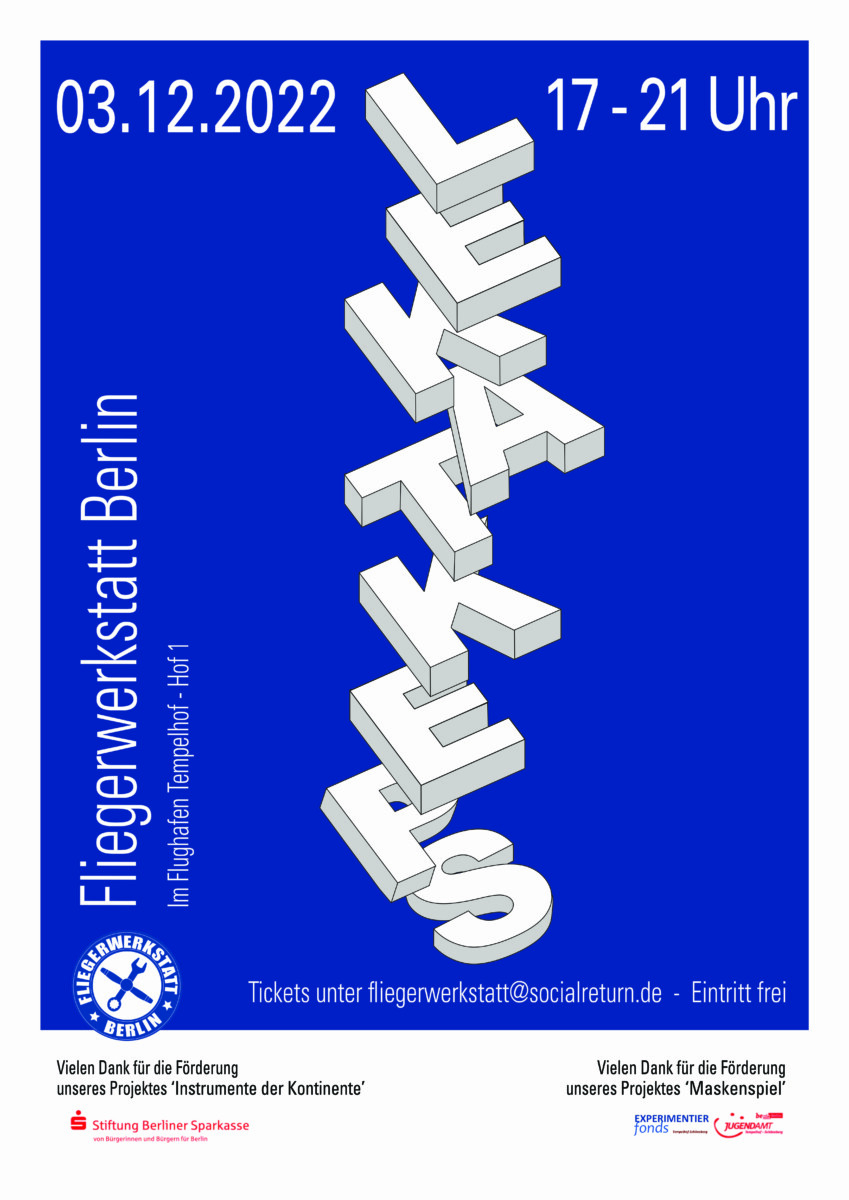 Our project ‘Practical testing for young refugees’ in cooperation with Arbeit und Bildung e.V. and IPLE is in its fourth year. 72 young people from six schools were each at the Fliegerwerkstatt for a week during their orientation phase. The time until the autumn holidays was used to strengthen the language and social skills of the individual groups, to support their professional orientation and, if possible, to find an internship from November onwards.

All participants were able to take part in the project ‘Instruments of the Continents’ in the Fliegerwerkstatt.

Our PE groups from the participating schools:

Under the title ‘We are the tenants – Vacancy at the former Tempelhof Airport? No way!’ the Berliner Zeitung also reported on the Fliegerwerkstatt on 8/6/2022. Link to the BZ-Berlin article

When Donald Becker joined the team, he brought with him a project from the event theater. According to his conception, the stage design for the play “Das Wirtshaus im Spessart” (The Inn in Spessart), which will be performed at the Brandenburg Theater Festival in the St. Paulikloster, will be created together with the young people of the Fliegerwerkstatt. 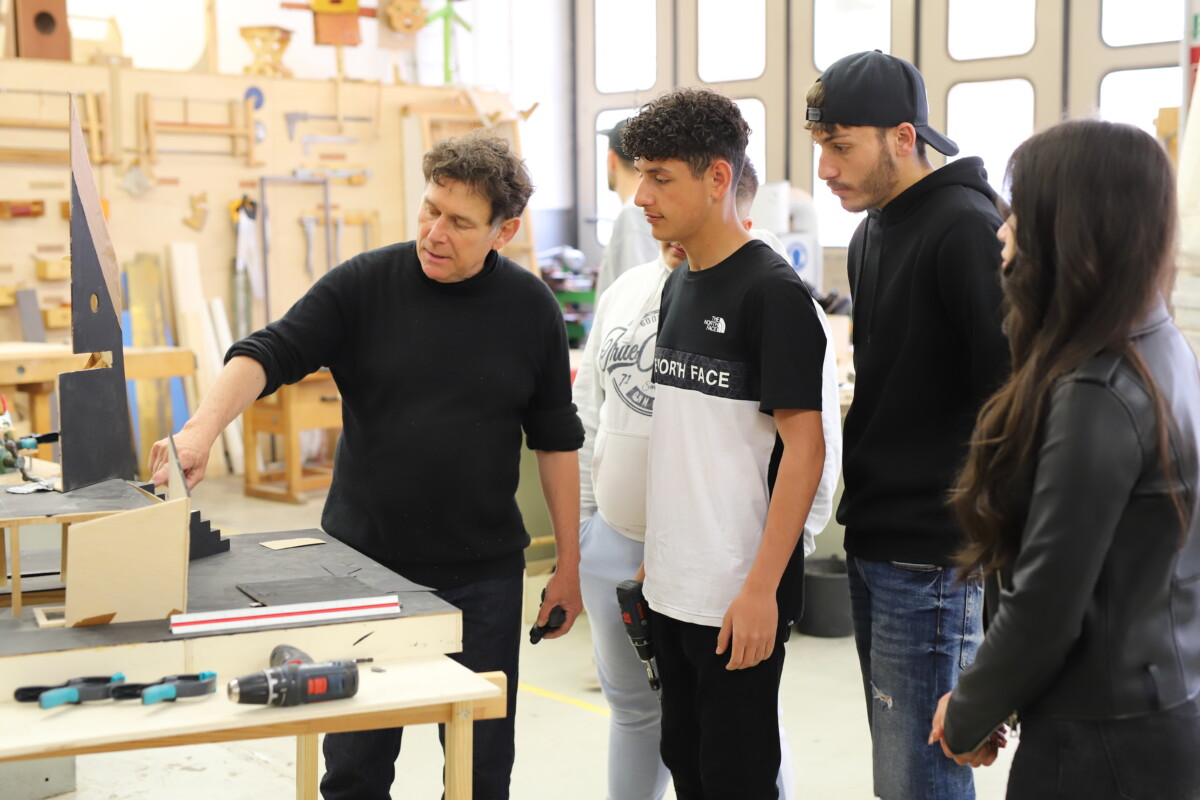 According to the designs, a 1:10 scale model was built, from which the young people can take all the measurements and easily translate them into the real sizes.

The eight-meter-high stage parts are sawed, screwed, covered with molton fabric and coated with fire-safe glaze. 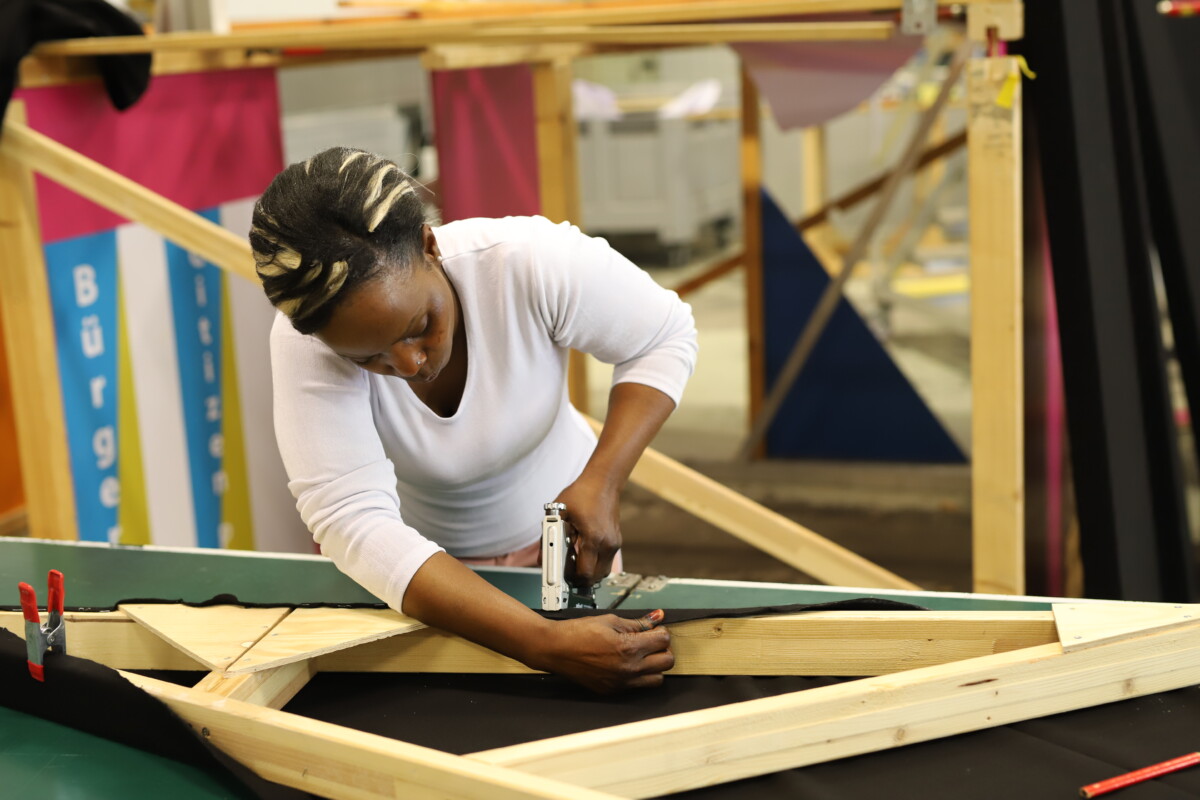 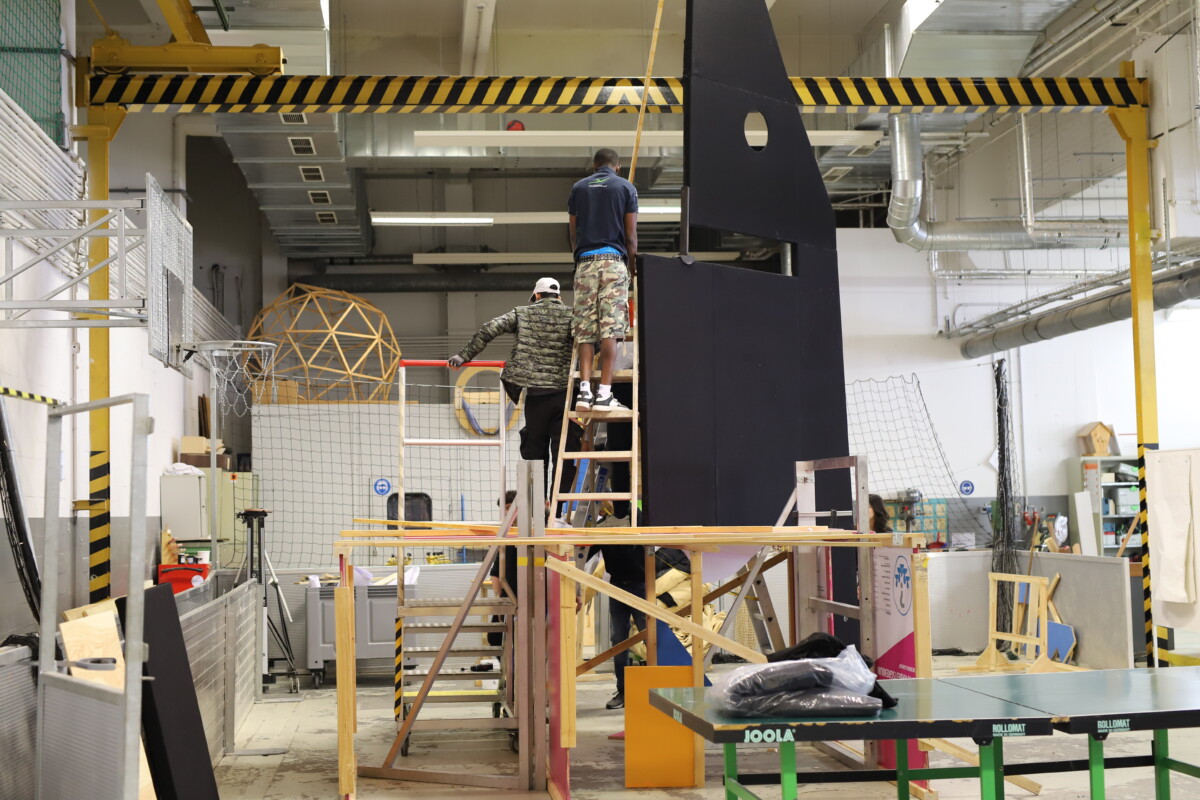 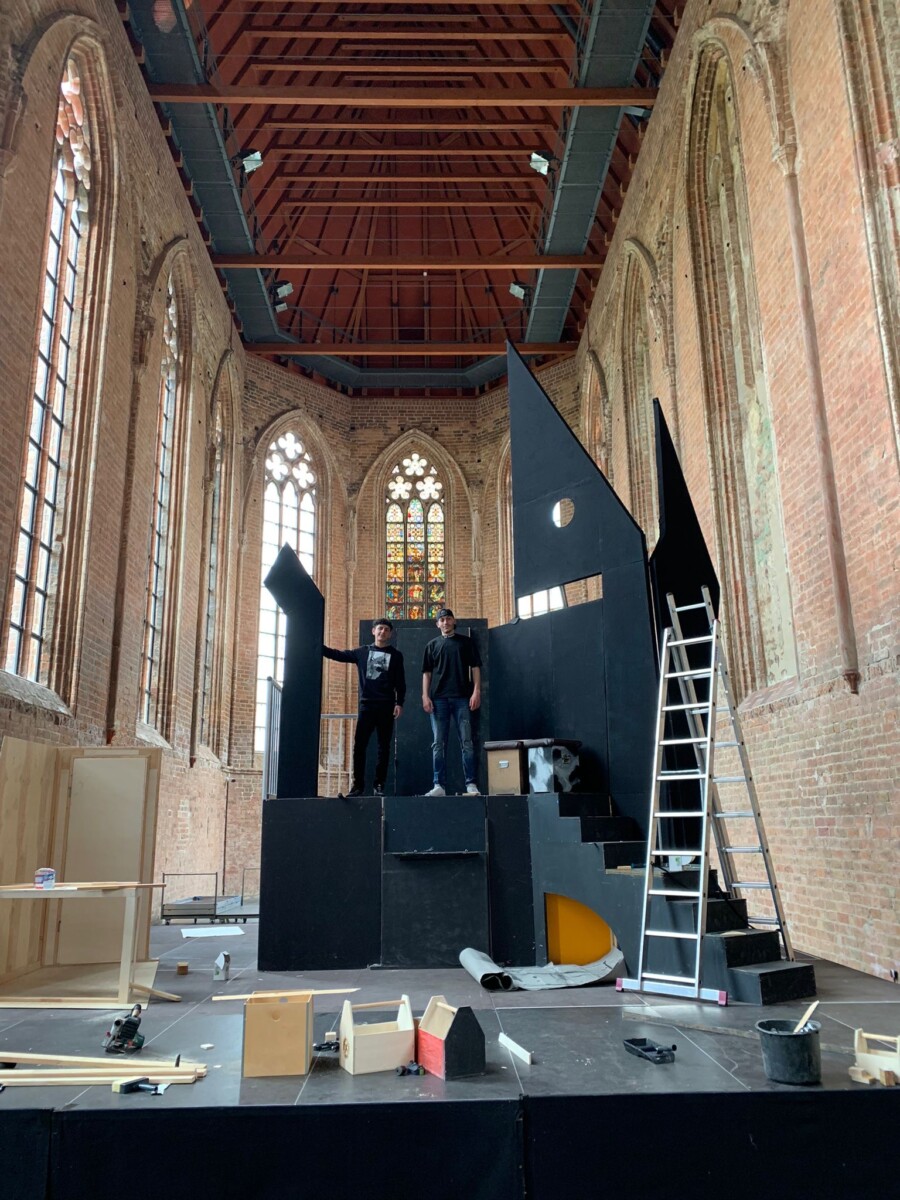 The final stage parts were built directly on site.

Over Whitsun, the play will be shown at the St. Paulikloster in Brandenburg an der Havel.

Children and young people from all over the world come together at the Fliegerwerkstatt: We currently have participants from Germany, Guinea, Iran, Iraq, Afghanistan, Pakistan, Russia, Romania, Albania, Peru, Lebanon, the USA and Ukraine. Just listing the names of their countries of origin and imagining their respective landscapes evokes a sound. This is the sound world we are trying to bring together in this project. The young people bring their cultural imprint to the outside world with the instrument they have built for this purpose. The sound of the mountain ranges of Afghanistan resounds together with the ones of the streets and squares of Berlin. 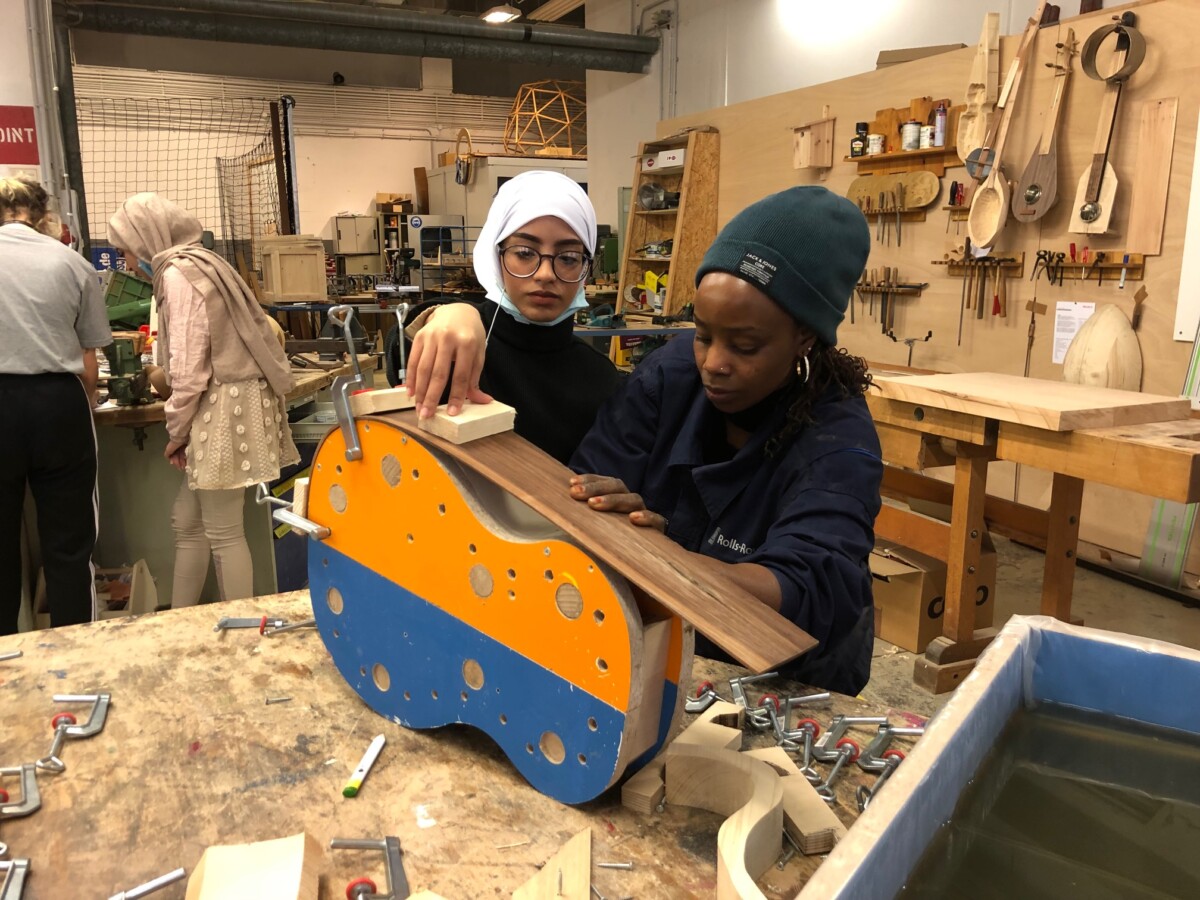 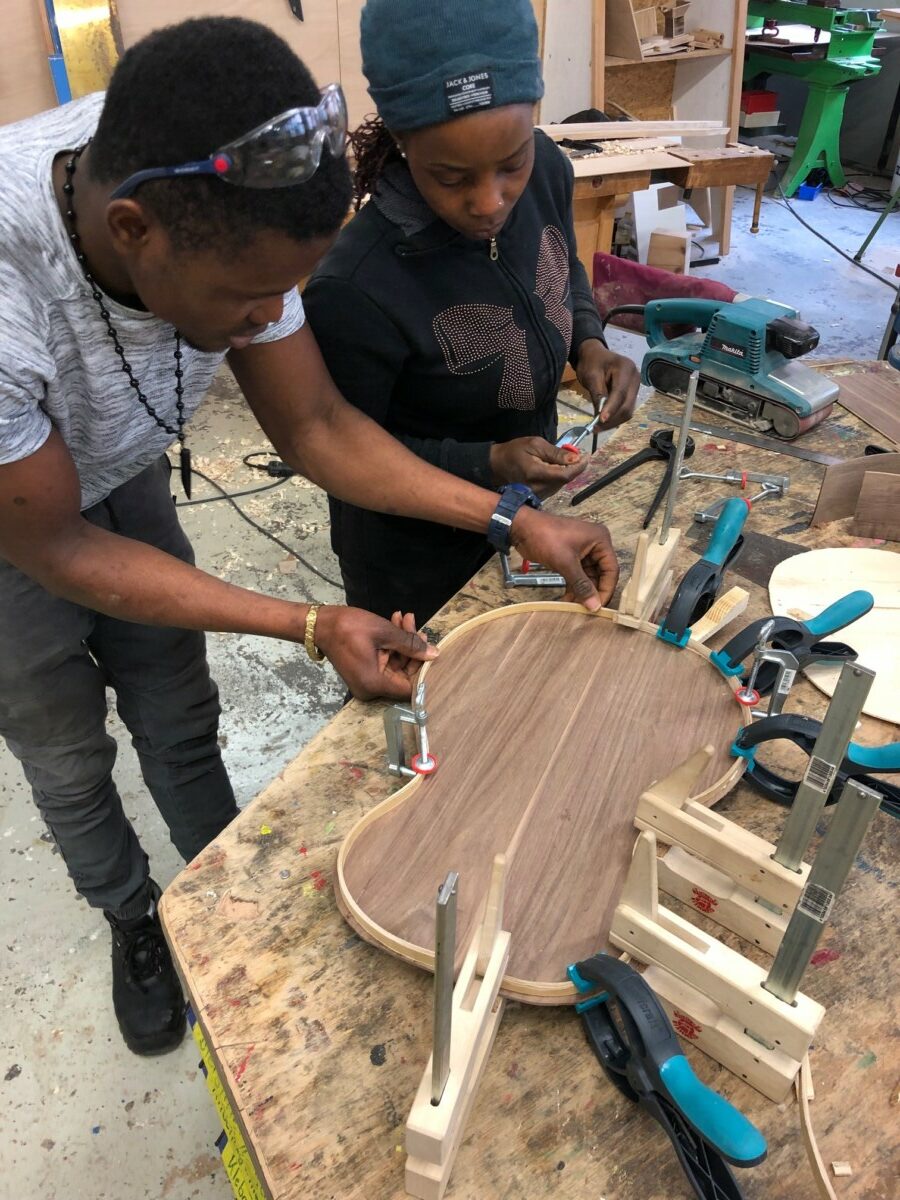 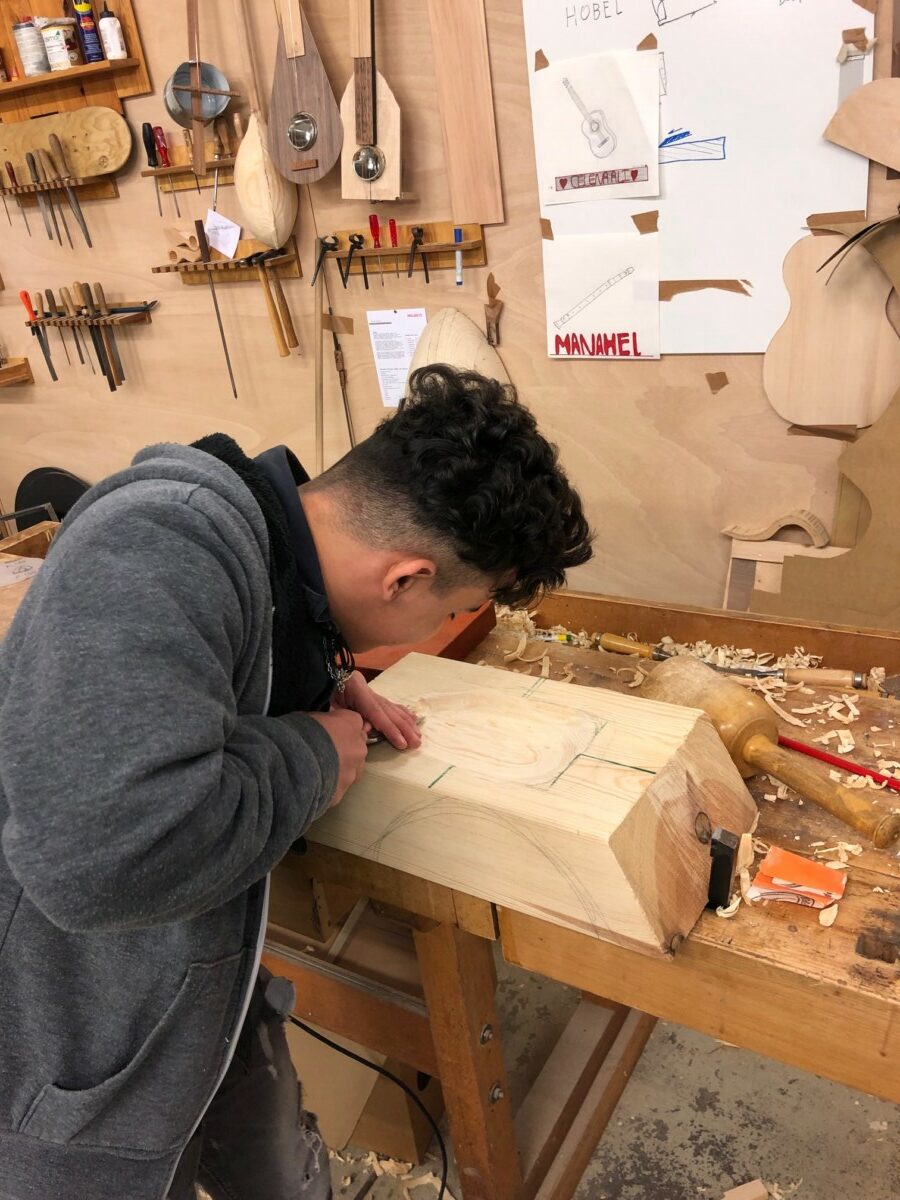 Information about the project and the possibilities of participation can be found in our flyer “Instruments of the Continents”.

Interested parents, principals and teachers can get more information about the concept from:

Since 2014, the community garden Allmende-Kontor exists with meanwhile more than 250 raised beds. With our young people we have now also built a raised bed on the sunny Tempelhofer Feld and can start growing vegetables.

Fortunately, we have repaired plenty of bicycles. This makes it much more fun to cover the three kilometers to the other end of Tempelhof Airport.

The restoration of the cockpit mockup of a Dornier 728 jet is completed. A great project in cooperation with the Museum of Technology and Günter Hujer comes to an end.

At the beginning of the year we continued with the construction of the canoe. The battens are sanded, now the fiberglass mat and the epoxy resin could be applied.

The gunwale made of ash wood forms the end of the board. It is also the suspension for the seats and the center bench of the canoe.

Next door in Hangar 7, the Condor, which has been restored over a period of two decades, is currently being fully reassembled. The restoration is a joint project of the German Museum of Technology, Airbus, the Deutsche Lufthansa Berlin-Stiftung and Rolls-Royce.

The historic Focke-Wulf Fw 200 “Condor” aircraft is the only surviving example of this type. 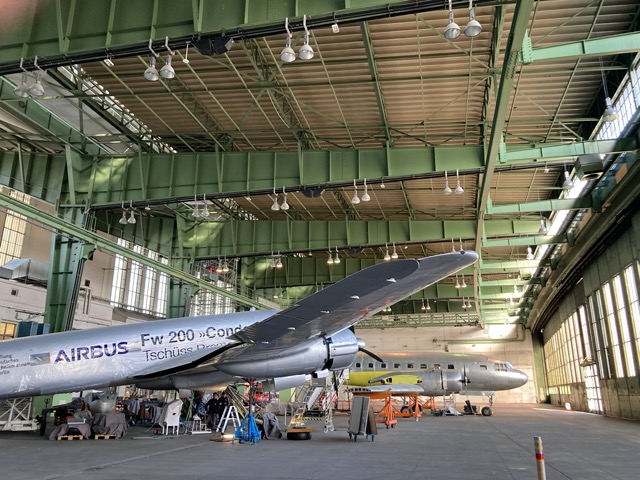 Here and there parts are missing that are no longer present in the original. If possible, replicas made of wood and metal are produced together with the young people from the aviation workshop.
Here, the hubcaps are being reproduced from wood. 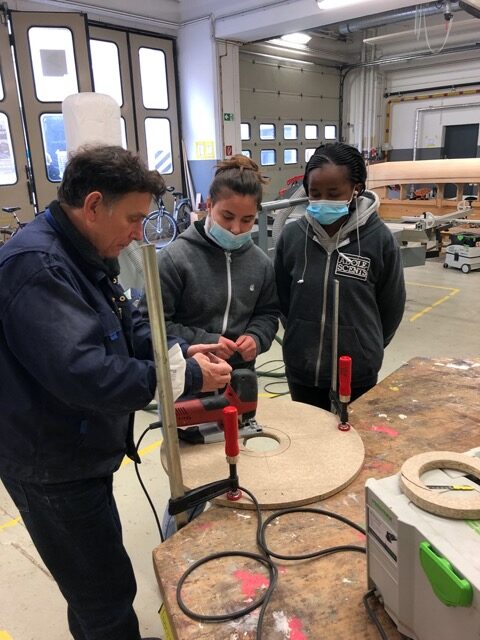 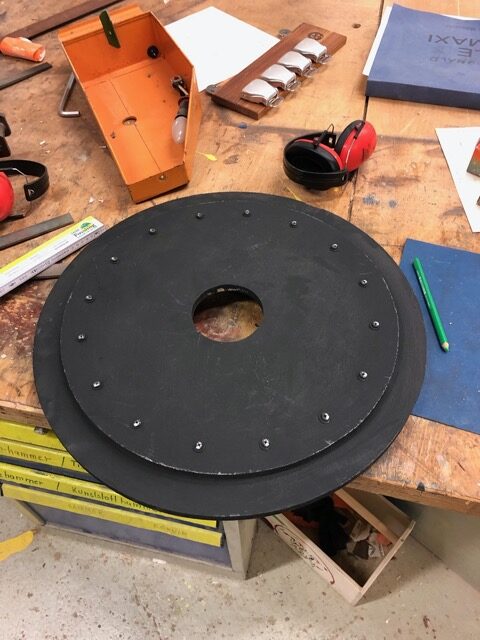 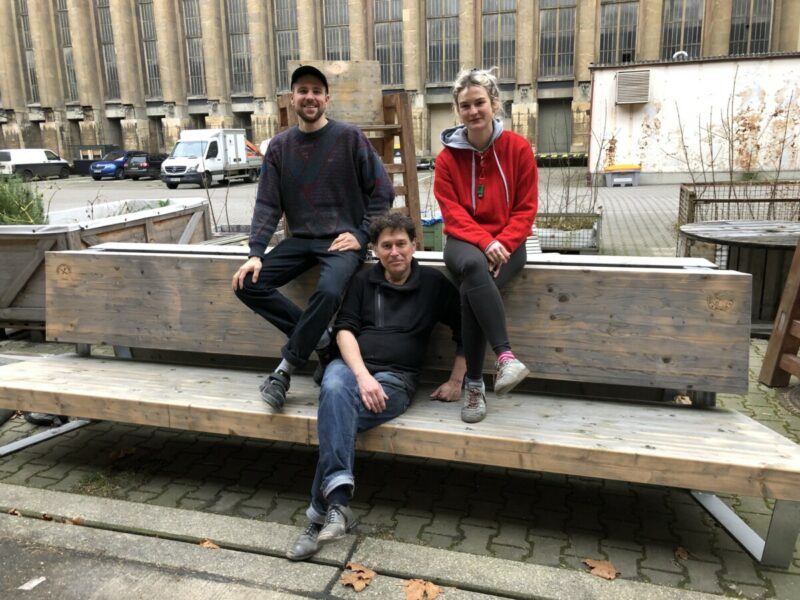 Our team has changed this year after Dirk Dreissen left the Fliegerwerkstatt after more than four years.

Social pedagogue Patrick Peinhopf has been on board since February. He completed a manual apprenticeship as a production mechanic before starting his studies.

We were able to win over the set and stage designer Donald Becker, who has also developed and realised exhibition designs for various museums as well as youth film and theatre projects, as a work educator.

Since December, Rosa Kantereit has joined us as a work educator who, as a technical model maker, brings with her manual and CAD know-how.

Jonas Wittrock is still available to us as a working student.

A mixed team with very different expertise and a lot of ideas for the coming years!


That's how it all started:
Fliegerwerkstatt 2015